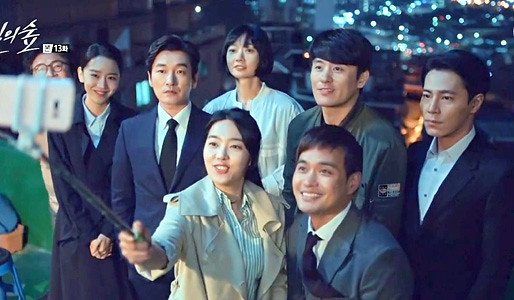 I’m hesitating to call Forest of Secrets a masterpiece, as what show is truly flawless, but FoS sure comes awfully close. I finally had the time to finish it and I’m still basking in this warm glow of having watched something truly good. If I was someone more atuned to critiquing TV shows, I’d probaly find things to nitpic… luckily I’m not. FoS is the best kdrama I’ve seen in years and very likely the best Korean crime show I’ve ever watched. My hat off to the whole team, who gave us something so grounded and well executed. Even though some of the actors may have featured more prominently, mostly due to their character’s placing in the story, FoS is truly a group effort. Everyone was pulling their weight, equally.

Korean crime shows tend to be overly flashy with loads of window dressing, which is usually just a way to cover a less than stellar script, questionable acting and odd directorial choices. Loads of sturm and drang with the side of excess violence, which imho does not equal ‘exciting’. There’s none of that in FoS. The suspence comes from a well laid out, tight plot with a clear direction and complementary directing. Even the OST is properly harnessed as a mood builder rather than to overly underline specific moments. It’s kinda rare these days for a drama to let the viewers figure out things by themselves, without enhanced musical cues. One thing about the setup of the show that really sticks to mind is how full of misdirection and red herrings it is. It isn’t just the characters who hide things and ‘lie’. Some of the red herrings were pretty easy to spot, especially towards the end, but… while you were patting your back for spotting them, you’d soon realise TPTB had slipped something else by you. 😀 This is one show where it pays not to count your chickens before they’ve hatched.

The episodes may be of that typically bloated TvN variety but in no point did I feel like they dragged. There isn’t any filler. The plot is intricate and there is quite a bit of ground to cover to merit the longer running time. FoS is also more of the ‘slow build-up’ type than ‘thrills a minute’ and there are these moments of calm dotted here and there that leave the story room to breathe. The slower pace gives you time to get to know the main characters in a more organic way. Like you would somone you’ve just met in real life. The drama feels rather realistic, even the leagalities and crime solving look believable. People may be smart but there are no superheroes or -villains. It’s quite clear that even the baddies are just humans with typical human failings. Some of them you feel a measure of sympathy for. I can understand the underlying reasons even if I won’t condone the measures they took to achieve their goals. I appreciate the fact that the characters stay ‘in character’, some change and grow but no-one gets a sudden personality transplant. The Weasel is still a weasel at the end. *g*

Bae Do Na and Jo Seung Woo are so, so good! Sigh. In a world where overacting and grand but empty gestures are frequently toted as ‘great’ acting, it’s wonderful how minimalistic but assured these two are in their portrayals. They don’t need any grandstanding to make Yeo Jin and Shi Mok feel totally real. I rather loved both characters, as different as they are. Yeo Jin is so wonderfully warm and emphatic, yet she is capable of being kick-ass and assertive as well. She is a professional. Shi Mok starts out as rather abrasive and cold but he made me oddly sad at the same time. I’d say he is the one that changes the most. Not in a way that would render him unrecognizable. He is still Shi Mok, only more in tune with the people around him. Which sometimes shows in rather adorable ways. Together Yeo Jin and Shi Mok form a pretty effective crime solving duo, they complement each other. Some of their interactions are downright funny as well.

As I’m not a shipper it always boggles the mind how some people can’t watch a drama without trying to insert a romance in it. Let’s make it clear, there is NO romance in Forest of Secrets. Not even a whiff of it. There is bonding, camraderie, budding friendships and even a rather misguided hero worship turned into a kind of schoolgirl’s crush but that’s it. No romance, so deal with it! 😉

What Shi Mok with his scooby gang and those who supported them achieved is just a small victory. Shi Mok himself was quite realistic about it, he’s no fool and he knows how deeply the rot has penetrated the system. Things won’t change in a hurry. Show still manages to go out in a hopeful note. And it’s quite possible the scooby gang will be gathered again, for another case.