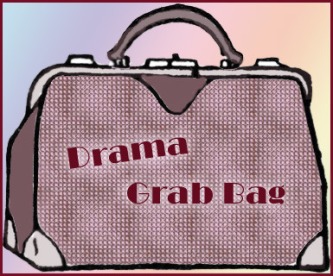 Feels somewhat odd that my drama roster at the moment consists of 4 jdramas and only one kdrama, one that is rather precariously tottering at the brink of toppling to the discard pile. Soooo, let’s start with that one.

Mask
Sadly episodes 3-4 were not as hilarious as ep 1 (where all the good stuff seems to have been, ha) or even ep 2. Which is why Mask does not merit a separete post. I still found parts of the drama quite entertaining and funny, so points for not pissing me off this early. Now I’m wondering if all the things that I found so funny in the beginning really were unintentional for the most part. I did hope Mask was going to be more tongue-in-the-cheek but at least it hasn’t gone all ‘This Is Serious Bizniz’ type of emo. Anyways, they’ve toned down the crazy and brought bits of actual plot to the forefront so I’m somewhat interested in seeing where this is heading.

Mr Hot & Dangerous is eeeebil but maybe not quite as bad they’ve led us to believe and clearly not as forward thinking either as he didn’t count on the worm turning. Ji Sook may yet prove to be his downfall. But then, he looks quite pretty when he is suffering. XD I haven’t yet formed a proper idea about our lead but I’m sure there is a real man somewhere there, underneath the mental problems – real or drug induced. Instead of the actual deer in the headlights we now have Ji Sook in it’s place. Sigh. It’ll get old real fast so they better give her a backbone quite soonish. Talking about Ji Sook, we now have a pretty good idea about the doppelganger thingy. Apparently Ji Sook had an older sister (Ji Un) who died, but as mom looked rather shifty when they talked about that in the flashback, I’m thinking she gave her away. They did not mention what age the sister was, so she could have been few years older and lookd exactly like Ji Sook.

Acting could be few notches better all around as everyone is now rather cringeworthy. Pity that this part doesn’t seem to be intentional. I guess I’m going to keep watching as long as I find Mask entertaining but as soon as things start to annoy the hell out of me, I’m gone.

Shinya Shokudo
I’m really enjoying these short vingnettes of the late night diner and it’s quaint customers. The stories are heartfelt and feel very real. I love Master and how everything is seasoned with humour, jdrama style. *g* I pummeled through S1 within few days and I’m now onto S2. Don’t watch this drama with an empty stomach…

Tennou no Ryouriban
My 2nd food oriented drama, ha. This one is about a simple guy called Tokuzo Akiyama who eventually becomes the chef for the Emperor of Japan. TnR is based on a non-fiction novel by the same name and the main character is based on real Tokuzo Akiyama. Story starts from year 1904 and follows Akiyama from his rural roots, through his introduction to western style cooking, first jobs and learning the ropes in Tokyo, to culinary school in Paris and back to Japan to became the Emperor’s chef. Apparently it covers the period of WW2 and after as well. I’ve always loved historical dramas and TnR has so far been quite interesting. They’ve captured the era very nicely. I’ve no idea how many episodes it’s actually going to be but so far I’m in for the long haul.

I’m Home is chugging along nicely as we approach the end. We have been steadily learning more about Ieji’s past and looks like something major is going to pop up next epi. Everyone seems to have secrets, even Ieji’s pretty 2nd wife. Nothing stays buried forever and I’m looking forward to finding out how the reveal at the end of ep 7 will affect Ieji’s and wifey’s relationship. Will the masks finally get ripped away?

Neko Zamurai 2 is a totally silly little romp but I’m througly enjoying the escapades of our roaming samurai and his pretty kitty. The episodes at ca. 20min are just the right sized morsels when one needs something short, fun and cute to brighten up the day.

Episode 4 killed all my interest in Orange Marmelade in the end, so I decided to drop it. I was thinking about the next episode and realised I didn’t care a whit what that might contain. Lee Jun Ki’s upcoming Scholar Who Walks the Night is quite sufficient for me as far as vampires in Joseon era go, so I’m saving the spot for that. Hopefully it delivers as the last fiew LJK dramas have been a bust for me.